Aikido
Is the Path of Harmony
Between Humankind and the Universe

Kumano: the source of Aikido

Aikido originates from the region of Kumano in Japan. Kumano is an old name for the South of the Kii peninsula, which projects into the Pacific Ocean. It is the oldest sacred site of Japan and is known as “the country of the gods”. Its sacred origins are much more ancient than the origin of Japan. The “Kojiki”, also called “Records of Ancient Matters”, the oldest chronicle written in Japanese, tells us about the creation of the nation, about the journey of the first Japanese emperor and his troops from Kumano to Yamato, today called Nara, where he fought a battle for his country. The origin of the Japanese nation appeared from the depths of the Kumano Mountains.

The rough coast and the green mountains, overflowing with fresh water, have forged in people’s minds a deep sense of terror mixed with admiration and veneration for nature. Many natural objects like trees, rocks, waterfalls, are known as being inhabited by the Kamis.

When Buddhism was introduced to Japan in the sixth century, this area became an important place of ascetic practices. Kumano was, and is still now, a pilgrim’s place. The number of pilgrims from every walk of life who followed the paths of the Kumano Kodo pilgrimages was so high that it was called “the procession of the ants to Kumano”.

Because the cultural heritage of this area is so rich, and especially because of the purification rituals still practiced, the three important shrines of Kumano (Kumano Hongu Taisha, Kumano Nachi Taisha and Kumano Hayatama Taisha) and the pilgrimages paths which link them together have been registered by UNESCO as a World Heritage Site.
http://whc.unesco.org/en/list/1142/

Morihei Ueshiba was born in 1883 in the town of Tanabe, which is the beginning of the sacred area of Kumano. He was the Founder of Aikido, a martial art which uses the strength and the momentum of the opponent to execute many different kinds of immobilizations and projections. Aikido is not only a highly developed physical art, but it is also a philosophical and spiritual path.

Since his childhood Morihei Ueshiba was deeply influenced by the rich spiritual background of Kumano. During his whole life he regularly went back by train to his roots. He taught many times in Shingu, in the South of the Wakayama Prefecture. From there he frequently visited the great shrines of Kumano. Often we can hear that O Sensei mastered Aikido in Kumano. His grave is now near the Kozan-ji temple, in Tanabe. It is a place of meditation for many aikidoists from everywhere in the world.

At Funada Dojo, the spiritual teaching of O Sensei Morihei Ueshiba is still taught. The inauguration of the Dojo was on April 2015. The Dojo Cho (chief instructor) is Motomichi Anno Sensei, 8th dan Aikikai Tokyo. The Dojo has been created thanks to the generous help of Kiichi Hine Sensei. Every training is an opportunity to purify one’s heart and to polish one’s soul. There is no pretension nor arrogance, but only shugyosha (people who practice the shugyo, deep study) who meet together to try to follow the way which was transmitted by O Sensei, with joy and humility. The fresh and harmonious air of the Kumano Mountains is blowing in the Dojo.

Geneva Takemusu Dojo: an extension of the Funada Dojo

At the Geneva Takemusu Dojo, the deep and rich teaching of Morihei Ueshiba Sensei is transmitted by Jean-Pierre Kunzi Sensei Sensei. For many years, the connection with the Dojo from Kumano has been strong and close.

Geneva Takemusu Dojo contributes to preserving the cultural and spiritual heritage of the Kumano area through an Aikido practice in a traditional form. It also allows interested people to experience directly this precious heritage of humanity.

The Geneva Takemusu Dojo is both deeply rooted in the Kumano area and wide open to the world. It has many close connections with other Dojos in Europe, USA and Japan. 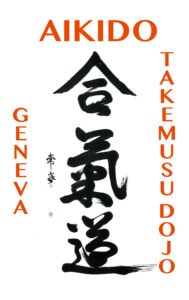