Morihei Ueshiba is the Founder of Aikido. He was born December 14, 1883 in Tanabe, in the Kumano area. He trained hard numerous years and received deep and precious teachings in martial arts and in the spiritual realm.

He spent all his life fostering the path of harmony – Aikido – and extending it throughout the entire world. Through his teaching, he wanted to bring peace to all humanity. His defining feature was to give Budo the direction of the way of love.

He had a strong bond with the Kumano area, and made many spiritual retreats there. He asked Hikitsuchi Sensei to build a Dojo in Shingu. After that, he taught many times in this Dojo.

He died April 26, 1969. His grave is now in Tanabe, in the Kojan-ji temple area. He received the name of Aiko no Mikoto (Kami of the shining love).

Michio Hikitsuchi Sensei was the Dojo Cho of the Aikido Kumano Juku Dojo.

He was born July 14, 1923 in Shingu, in the Kumano area, Wakayama prefecture. He followed O Sensei Morihei Ueshiba’s teaching since the age of 14 and had a very close relationship with him. On 1954, he built a Dojo in Shingu at O Sensei’s request.

On January 10, 1969 he received the rank of 10th dan Aikikai Tokyo directly from the hand of O Sensei.

He died February 2, 2004. He left in the heart of all aikidoists who had met him the imprint of sharp severity and great generosity.

Seeing himself as “the open book of O Sensei”, he kept wide open the doors of his luminous knowledge for all his students in Japan and the world, and they remain deeply grateful to him.

He was born May 14, 1931 in the Kumano area. At the age of 23 he was received at the Kumano Juku Dojo by Hikitsuchi Sensei. For more than 40 years he remained his faithful student until the death of his master. Now he is the Funada Dojo’s chief instructor.

Anno Sensei was also O Sensei’s student for 15 years. He received from him the rank of 6th dan Aikikai Tokyo.

Since 1978 he has held the rank of 8th dan. He has taught many seminars in the USA and in Europe.

With a great generosity, he is still transmitting O Sensei’s teaching in the Kishu Kumano Aikikai Funada Dojo. This teaching is deeply rooted in the spiritual tradition of the sacred Kumano area. With infinite patience and a tremendous goodness, he leads his students to the realization of harmony and love.

Jean-Pierre Kunzi is the Dojo Cho of the Aikido Geneva Takemusu Dojo.

He has trained many times at the Kumano Juku Dojo in Shingu, Japan. Now, he trains regularly at the Funada Dojo where Motomichi Anno Sensei still transmits O Sensei’s teaching. With rigor and kindness, Jean-Pierre Kunzi Sensei makes accessible this teaching to his students. He now holds the rank of 5th dan Aikikai Tokyo.

Thanks to his professional experience as a sports teacher since 1983, and as assistant director of a public school during some years, he possesses a rich knowledge in pedagogy and human relations. 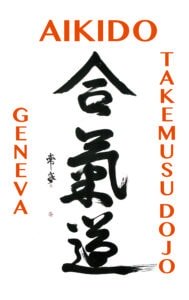